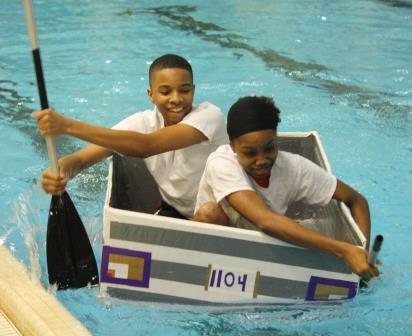 Hoech Middle School’s eighth-graders proved that their engineering skills could pass the swim test with flying colors as they raced their cardboard boats across the Ritenour High School pool to cap off E-Week on March 15. View photos from the event.

E-Week, short for Engineering Week, celebrates the Project Lead the Way engineering pathways by middle school and high school students in Ritenour. Traditionally, Ritenour High School students have led the way in the pool with boats they designed out of cardboard and duck tape, but this year seven teams from Hoech took over the pool with their creative themed-boats and costumed captains. Boats that launched into the water were: Sesame Street, Beach Babes, Heavy Metal, Ninja Turtles, Black Panther, 101 Dalmations and KW-News.

For two months, eighth-graders who have taken PLTW courses at Hoech spent two days a week after school designing and building their boats.

The winning boat, KW-News, was boat #2 for twins Kyla and Kyle Williams. Their first boat, which just needed a few decorative finishing touches, met the unfortunate fate of the dumpster before it could be finished.

“My brother thought he’d put it some place where no one would mess with it. Then the next day I went to add some decorations to it and I couldn’t find it,” said Kyla Williams. “I called him and said, ‘Where is it? It’s not here.’ He put it behind the recycling bin, and it apparently got recycled accidentally.”

Added Kyle, “Yeah, we basically had a week and a half to do it all over again. I basically built another one and she did the decorating.”

Their teamwork paid off, and they left the pool smiling. Their soaked boat, however, like the others that raced that day, was headed for the dumpster. Again.