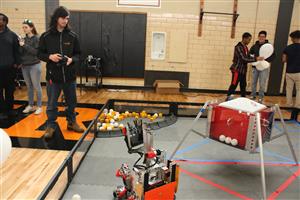 E-Week (Engineering Week) at Ritenour High School took on a new spin in 2019 as it celebrated its 10th anniversary, March 12-15.

Traditionally, the week focused on celebrating projects by students enrolled in Project Lead the Way (PLTW) engineering courses. But this year, an expanded project fair open house on March 15 showcased not only the traditional engineering and computer science courses, but also the biomedical pathways and other technology and math classes.

RHS students had the opportunity to explore STEM by “driving” robots created by the RoboHounds, and finding out more about blood typing and DNA, civil engineering, architectural design, cyber security, forensics at more than two dozen booths. The booths were  run by students who coordinated projects for related classes..

In addition, seniors in capstone PLTW courses showcased their projects in the auditorium lobby.