Four outstanding Ritenour alumni were inducted into the Ritenour Hall of Fame on Oct. 4, 2019 in the Ritenour Auditorium. Cheering them on stage were more than 165 friends, family members, teachers, coaches and current Ritenour administrators and students.

This year’s Hall of Fame inductees were:

Dr. Brian Rich, principal at Ritenour Middle School, was the emcee for this year’s event.  After the unveiling of their portraits on the Hall of Fame wall in the Ritenour Auditorium lobby and dinner, the Hall of Fame ceremony celebrated the inductees’ achievements as a Husky, along with their road to success in their careers and their commitment to their families and communities.

“Over the past century there have been tens of thousands of Ritenour graduates. Yet, only 96 have their photos on the wall of our beautiful auditorium lobby,” Ritenour High School Principal Jeff Marker told the audience.  “When you add in the eight lifetime achievement recipients – we have more than 100 of Ritenour’s finest immortalized in our Hall of Fame.  It is an amazing and prestigious honor.”

View photos from the event.

Judge Burlison is known for has a heart for humanity and continually using his talents to make the world a better place.  He is the presiding judge of the 22nd Judicial Circuit in St. Louis and has had a long and distinguished career as a lawyer and judge.  He has presided over numerous high-profile cases and was recognized by the Hall of Fame committee for his tremendous professional accomplishments, generosity and for his commitment to improving the lives of all he encounters. Judge Burlison’s wife, Rita, presented him with his hall of fame plaque.

Lacey is an award-winning military veteran, and operations and logistics manager. He served with honor in the U.S. Army for decades, including tours of duty around the world. He has been awarded the Bronze Star Medal for his work in Operation Iraqi Freedom, five Meritorious Service Medals, seven Army Commendation Medals, National Defense Service Medal and many other military accolades. He is currently the warehouse and shipping manager for Volpi Food, Inc. in St. Louis. Lacey was presented his award by his long-time friend and Ritenour Hall of Fame member Clay Zigler.

An inventor, engineer and builder of his own patented experimental airplane, Meyer began his unique and accomplished career while still a student at Ritenour High School, building and detailing scale airplane models for local museums. Meyer served in the U.S. Army during WWII, and his subsequent 30-year career in repairing airplanes and helicopters for the U.S. Navy gave him the means to pursue his passion for experimental aircraft engineering. He inspired a generation of aeronautical enthusiasts with his award-winning Little Toot, an aerobatic biplane he designed and built himself. George Meyer’s son, Tom Meyer, and his daughter, Joy Sheffield, accepted the award during the ceremony.

Wirtz had a positive impact on thousands of Ritenour High School students during his teaching and coaching career. He led the Huskies to two state track & field championships and coached 14 individual state track champions, eight champion track relay teams and one cross country individual state champion. Twenty-one Ritenour track athletes achieved high school All-American status through his guidance. Wirtz is a three-time Missouri Track Coach of the Year and was inducted into the Missouri Track and Cross Country Coaches Association Hall of Fame in 2001. Wirtz was presented a plaque by his long-time friend, Bill Becker. 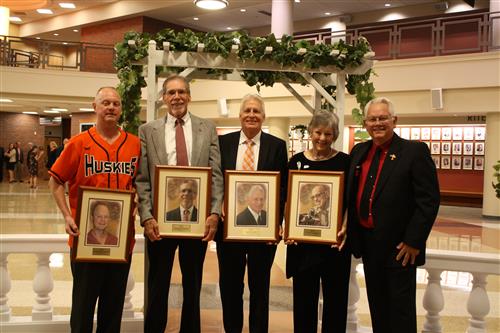