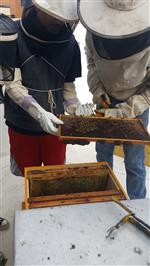 The Ritenour High School Bee Club has been busy! Under the guidance of high school art teacher David Appelbaum, students installed beehives last year that yielded 50 pounds of honey between June and August. The June batch was orange with a floral taste, and the August batch was black and sweet like molasses. The Bee Club quickly sold out of the Husky Spirit Black and Orange raw honey at a base price of $8 a pound.

RHS social studies teacher Jason Spurgeon, who has been part of the Bee Club from the beginning, helped with the large task of extracting the honey.

“I waited to extract the honey until school started, hoping the students would be able to experience the extraction,” said Appelbaum. “School did not open for in person classes, so students were not able to help in extracting the honey, unfortunately.”

Last fall, the Bee Club helped install two hives on the green roof over the upper lobby of the auditorium. They built the hives after school during weekly meetings and helped with the installation of bees into the hives. During the spring, the Bee Club checked on the hives and learned how to be true beekeepers. They rotated the hive bodies to encourage growth, and both hives survived the winter. When school closed due to COVID-19, the club could no longer meet to take care of the hives.

Appelbaum said, "I continued to check on them when I could and then updated the bee club members.  One hive ended up dying from a long cold snap. The hive did not have enough mass to handle the temperature.  The other hive dwindled to a few hundred bees.  I brought other bees and brood from another hive and added them to the hive.  This does not always work, but luckily it did, and the hive recovered and proceeded to get their frames built out and collect pollen and nectar.”

The Bee Club looks forward to maintaining the hive and harvesting more Husky Spirit Black and Orange Honey next year.