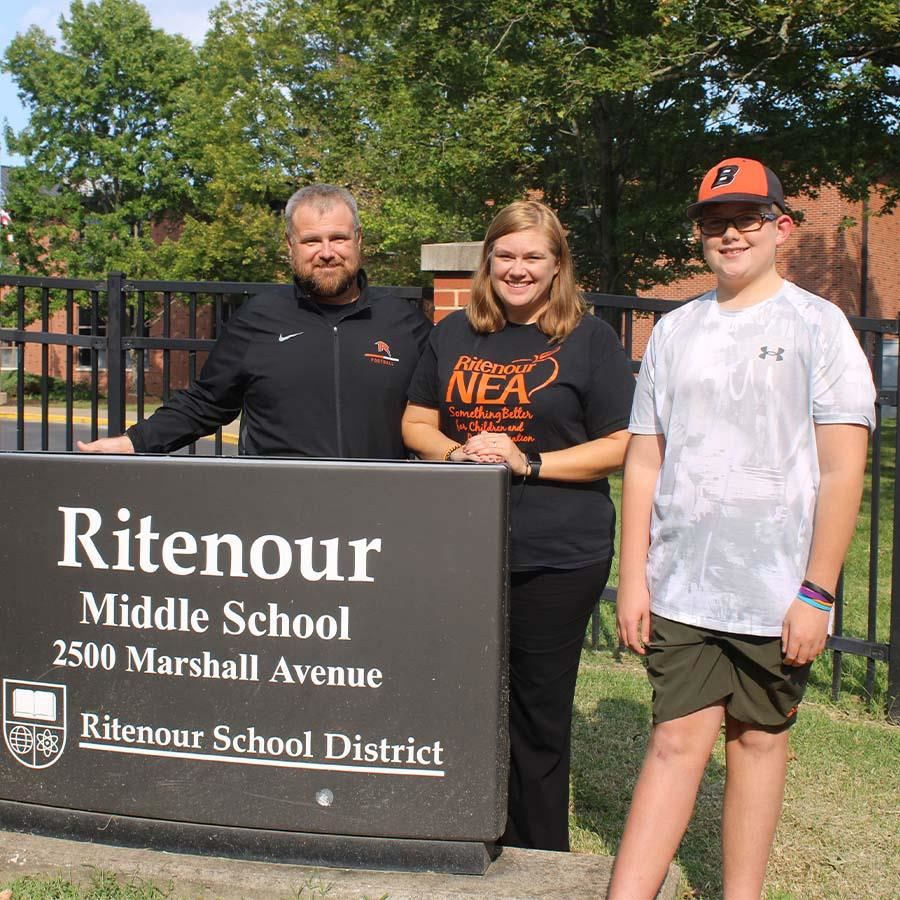 “I almost thought it was a SPAM email when I opened it and read that Nolen was a winner,” said Nolen’s mother, Bridget Elder, a Kratz Elementary teacher and Ritenour High School (RHS) alumna. “But then I saw I had a voicemail, and they said Nolen’s name was drawn as a winner for the $10,000 education savings account. That’s what convinced me it was real.”

Nolen’s father, Matt Elder, a physical education/health teacher and assistant football coach at RHS, also was shocked as he read the text message from his wife right before heading onto the field of the first football game of the season.

As for Nolen, he says he didn’t even know his mother entered him into the lottery for the scholarship.

“I was surprised and didn’t really know how I won it until my mom explained it to me,” said Nolen.

Nolen was one of 180 fully vaccinated Missourians whose names were drawn in early September 2021 in the second round of randomized drawings by the Missouri Department of Health & Senior Services and the Missouri Lottery. Adults whose names are selected win $10,000 cash; children who win receive $10,000 in an education savings account, a MOST 529 plan, that can be used for post-secondary institutions or K-12 education.

Although college is still six years away, Nolen says he is thinking about becoming an architect, so his parents are excited that he has a solid college fund already underway.

“This will help a lot,” said Matt Elder. “This scholarship now will be invested so it grows and can hopefully cover a good chunk of his college.”

Missouri Gov. Mike Parson announced the MO VIP campaign the day Nolen got his first shot, but the Elders weren’t even aware of the opportunity to sign up for a prize for either themselves or Nolen until a few weeks later.

After Nolen turned 12 in the spring of 2021 and the approval of the Pfizer vaccine for his age group was announced shortly thereafter, Nolen’s parents said they spent a lot of time researching if the COVID-19 vaccine was right for their child.

“We did a lot of research and then talked with our pediatrician,” said Bridget Elder. “The doctor took a lot of time answering our questions. That’s when we were convinced to go ahead and have him get the shot.”

Soon after they made that decision, Nolen had the opportunity to get his COVID-19 shot at a vaccine clinic at Ritenour High School that was administered by SSM Health staff.

Nolen said he really didn’t have too many worries about getting the shot, especially since RHS is almost like a home away from home for him since his father teaches there and grandfather, Jerry Nolen, was a longtime activities director there before he retired in 2019.

“It was familiar to me, so I was OK about going there for the shot,” said Nolen. “It really didn’t hurt, either. And now it makes me feel safer being at school.”

Added his mother, “This really was the best place for him to get the vaccine. It was convenient and in our community, and we all are really comfortable there.”

Ritenour has offered five COVID-19 vaccine clinics from March through August 2021 at Ritenour High School by partnering with the Missouri National Guard, SSM Health and Care STL Health. More than 1,000 Ritenour staff members, students, families and community members have been vaccinated during these clinics.