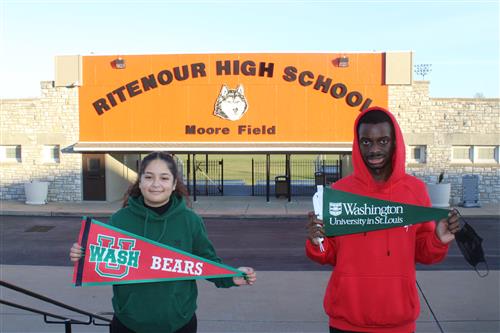 Gabriela Rojo and Fortuna Kadima received their acceptance letters in early December and are excited to have their college plans finalized.

“Getting accepted early decision at a highly competitive school like Washington University is an extremely rigorous process,” said Ritenour High School college counselor Cabrina Noonan. “Highly competitive schools are only accepting the cream of the crop to begin with, and those who apply early decision are adding another layer of competition to get in, so for Gaby and Fortuna to get accepted really is a tremendous honor that shows how outstanding they are. Both of these Huskies have a bright future, and we are so proud of them.”

Rojo plans to pursue biomedical sciences at Washington University and then transition to the university’s graduate program for physical therapy. She is active in Ritenour High School’s National Honor Society, captain of the drumline in marching band, vice president of the senior class and active in HOSA and Mu Alpha Theta.

Kadima plans to pursue software engineering at Washington University. As a Husky, he has been active on the robotics team and as a key sprinter on the track team and defender on the soccer team.