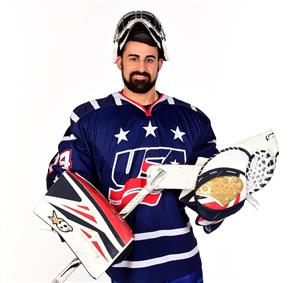 2007 Ritenour High School graduate Steve Cash has added another award to his illustrious list of honors.  Cash, a four-time Paralympic medalist in sled hockey, was named to the United States Hockey Hall of Fame Class of 2022.  Cash will take his place in the U.S. Hockey Hall of Fame on Nov. 30, 2022, during a ceremony in St. Paul, Minnesota.

For 16 seasons, Cash was the top sled hockey goaltender in the world. During his illustrious career, he won three gold medals and one bronze medal and represented the United States in four Paralympic Winter Games. He has also played in eight world championships and has appeared in more than 150 games for Team USA.

He was inducted into the Ritenour Hall of Fame in 2015 and was also the featured speaker at the 2015 employee convocation (with pro football Hall of Fame member Isaac Bruce and Build-A-Bear founder Maxine Clark).

Cash, whose right leg was amputated due to osteosarcoma (bone cancer) at age three, is among the most decorated sled hockey athletes of all time.   He was named the 2009 Paralympic SportsMan of the Year by the United States Olympic & Paralympic Committee.

The United States Hockey Hall of Fame is located in Eveleth, Minn.   You can read more about Cash and the honor by clicking here:  https://www.ushockeyhalloffame.com/stevecash