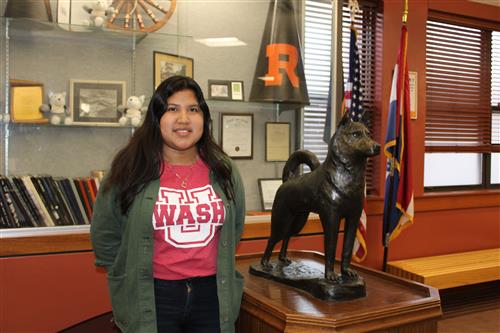 Garcia plans to major in international relations and biology at Washington University.

The QuestBridge College Match Scholarship is a highly selective process that matches top ranked students who have financial need to one of 48 highly selective colleges and universities. Last year (during the 2021-2022 school year), of nearly 18,000 applicants nationwide, only about 1,700 became QuestBridge College Match Scholars.

Garcia has been a student at RHS since the beginning of her junior year, after her family moved from Georgia. At RHS, she already has earned a Seal of Biliteracy in Spanish, her family’s first language, and is working on earning another in French.

This past summer, Garcia earned a scholarship to study abroad in Nice, France through the AFS language immersion program. The opportunity allowed her to take classes with other students from across Europe in the mornings and tour parts of the area in the afternoons.

Garcia has been involved in the International Club at RHS and has spent four years in HOSA (a club for future health professionals) both at RHS and her former high school in Georgia.

NOTICE OF NON-DISCRIMINATION: The Ritenour School District does not discriminate on the basis of race, color, religion, sex, national origin, ancestry, disability, age or any other characteristic protected by law in its programs and activities. The following person has been designated to handle inquiries regarding non-discrimination policies: Dr. Mike LaChance, Assistant Superintendent for Human Resources & Title IX Coordinator - Ritenour School District, 2420 Woodson Road St Louis, MO 63114 (314) 493-6055. Further information on notice of non-discrimination may be obtained from the Office of Civil Rights, (800) 421-3481.
Copyright © 2002-2023 Blackboard, Inc. All rights reserved.