A career fair held on Dec. 20, 2022 at Ritenour High School gave seniors the opportunity to get a jump on their future.

Seniors were able to visit the career fair in the auditorium lobby during their Husky Support time.

Senior Autumn Hayes, who graduated after finishing first semester in January, said the fair was helpful because she planned to earn money before attending college next year.

“It was a last minute decision to graduate early, but I had enough credits and thought it would be good to work before heading to college,” said Hayes. “This really helped introduce us to different opportunities and places where I can earn more money. It was really helpful.” 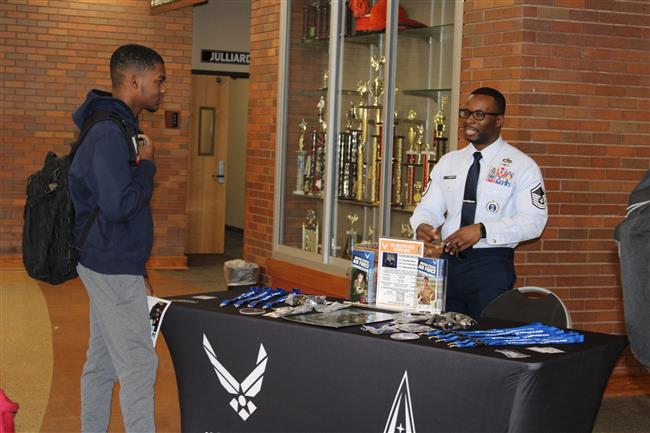 NOTICE OF NON-DISCRIMINATION: The Ritenour School District does not discriminate on the basis of race, color, religion, sex, national origin, ancestry, disability, age or any other characteristic protected by law in its programs and activities. The following person has been designated to handle inquiries regarding non-discrimination policies: Dr. Mike LaChance, Assistant Superintendent for Human Resources & Title IX Coordinator - Ritenour School District, 2420 Woodson Road St Louis, MO 63114 (314) 493-6055. Further information on notice of non-discrimination may be obtained from the Office of Civil Rights, (800) 421-3481.
Copyright © 2002-2023 Blackboard, Inc. All rights reserved.