Babies
Congratulations to Christina Melly, RHS English language arts teacher, and husband Matthew, who celebrated the birth of their first child, Oliver Alexander Melly. Oliver made his debut on Nov. 15 at 6 lbs. 11 oz. and was 19 inches long. 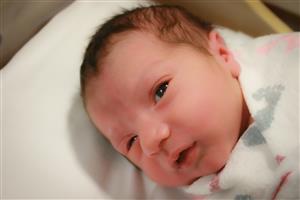 Kudos
Dr. M. Stacey Albin-Wilson, vice president of the Ritenour Board of Education, recently achieved Master Certification in the Missouri School Boards’ Association (MSBA) certified board member program. To earn this level of certification, Dr. Albin-Wilson completed additional professional development requirements beyond the 16 hours required by the Outstanding Schools Act of 1993. She earned at least 24 additional training credits, read two books related to school board service, attended at least to MSBA events and wrote an essay on her board service.

Sheneè McCoy, a Kratz fifth grade teacher, has been selected as a spotlight educator at the METC20 Conference Feb. 10-12, 2020 in St. Charles. She will be presenting on “Is This Writing? Moving Beyond Paper and Pencil.”

Sheneè McCoy and Christina Melly became the inaugural recipients of the Missouri National Education Association’s new Emerging Leaders Award for being outstanding educators who have made significant contributions as leaders in the MNEA. Christina also received the Shirley Cromer Leadership Award. Both were honored at the MNEA Conference on Nov. 23.

The Missouri School Public Relations Association (MOSPRA) recognized the Ritenour Communications Department this fall with three awards for outstanding communications that were produced during the 2018-2019 school year. Ritenour received two Awards of Merit for the district’s Facebook page and its digital newsletter, Inside Ritenour. The district also received an Award of Commendation for Ritenour’s newsletter, Ritenour News. The 2019 MoSPRA Communications Awards Program received entries from school districts throughout Missouri. Entries were judged by public relations professionals from both inside and outside the public education fields, and used standards that reflect national best practices in communications and public relations.

Betty Satterley, an office professional at the Administrative Center, was especially excited about this year’s Macy’s Thanksgiving Day Parade in New York City. Her granddaughter, Kira Satterley, marched in the parade playing her flute with the Blue Springs High School Marching Band. Kira is the daughter of Damian Satterley, a 1996 RHS graduate.