Kiersten Ashen, an Iveland Elementary second grade teacher, married her high school sweetheart, Corey Ashen, on July 10. Kiersten graduated from RHS in 2015, and her husband graduated as a Husky in 2014.

Erika Barrow, an SSD resource teacher at Kratz Elementary, became engaged to Mike Lindsey in July. They are planning to marry in October 2022.

Rolanda Dodds-Piggs, an office professional at the Administrative Center, is excited to share that her daughter, Reva Dodds-Marshall (RHS Class of 2011) and son-in-law, Charles Marshall, celebrated the birth of their third child (and their first son), Raylan Heru Marshall, on July 5. Raylan weighed in at 6 lbs. 4 oz. and was 19 ½ inches long. Rolanda is proud to share that Reva, who is a doula, gave birth at home by herself. Raylan’s proud big sisters are Cosima Marshall, 4, and Tahani Marshall, 2. Reva’s sister and Raylan’s proud aunt is Reauna Dodds, an office professional at Ritenour High School.

Tavonda Palmer Harvey, a graduation coach at Ritenour High School, and husband Stanley celebrated the birth of their son, Kash Blue Harvey on July 22. Kash made his debut at 6 lbs. 12 oz.

Betty Satterley, office professional at the Administrative Center, celebrated the birth of her newest grandchild, Emily Grace, on May 27. Emily’s proud parents are Jerrod (RHS Class of 2001) and Sheri Satterley. Big sister Amanda is thrilled to welcome her into their family, too!
. 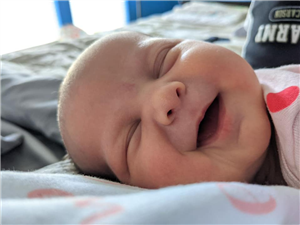 Rachael Tripp, a chemistry teacher at Ritenour High School, and husband Seth welcomed their third son, Jaxon Ezrah Tripp, into their family on July 20. Jaxon made his debut at 7 lbs. 2 oz. and was 20 inches long.  length. Rachael, Seth and older brothers Hayden (a first-grader at Buder Elementary) and Braden (a preschooler at the Ritenour School for Early Childhood Education) are so in love with the new addition! 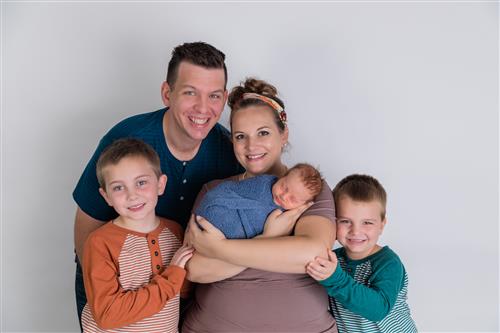 Jennifer Wilson, a family and consumer science teacher at Ritenour High School, and husband Tom welcomed their first grandbaby, Leo Vaughn Knelange on Aug. 22.  He was 5lb. 3oz. and 20 inches long.  His proud parents are Eva and Carter Knelange (RHS Class of 2020).

Laamar Cunningham, a nurse at Marvin Elementary, graduated with his master’s in nursing education on May 25 from Grand Canyon University.

Tina Nichols, a fourth grade teacher at Buder Elementary, is excited to share that her son, Drew Nichols and his Eureka Legion AA Baseball Team won the Legion State Championship in July. This is the first time in history that Eureka Legion AA has won the championship. For the season, the team was 34-1. They went undefeated in every round of districts, zones and the state championship.

Congratulations to Stephanie Ruggles, vocal music teacher at Ritenour Middle School, who was named Outstanding District Director Award for the St. Louis Suburban District by the Missouri Choral Directors Association. In addition to her commitment to RMS students, Stephanie has been the program coordinator for Opera Camp for Kids with Opera Theater St. Louis for the past four years. The camp was virtual in both 2020 and 2021 due to the pandemic.  In addition, Stephanie’s clinic, Let Them Play! Creative Opportunities for Incorporating Opera and Theatre Into Your Music Class, has been accepted by the Missouri Music Educators Association (MMEA). She will present a session about this clinic at the MMEA conference in January.
.

Congratulations to Wasim Walker, a discipline with dignity teacher at Ritenour Middle School, who was named the United States of America Track and Field (USATF) High School Girls’ Coach of the Year for Missouri. Wasim is the head coach of the girls’ track team for the Ferguson-Florissant STEAM Academy. The team won the 2021 Class 2 State Championship in Jefferson City, with first place medals in the 100m, 200m, 400m (record), 800m, 4x200m relay (record), 4x400m relay, 100m hurdles, 300m hurdles (record).