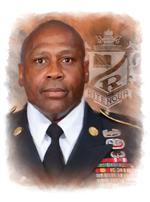 Lemuel Leroy Brock is the Command Sergeant Major of the Joint Communication Support Element for the United States Army. He has held every leadership position, including the senior enlisted advisor for the Joint Enabling Capability Command, and is the highest enlisted rank in the Army, a distinction achieved by only 0.8 percent of soldiers that enlist in the U.S. Army.

CSM Brock was an accomplished athlete in high school and was named Ritenour Athlete of the Year in 1979. He graduated that same year and would later marry his high school sweetheart, Lori. He enlisted in the United States Army in 1986, where he quickly rose through the ranks. He attended Basic Training at Fort Knox, Ky., and Advance Individual Training at Fort Gordon, Ga., graduating as a Signal Support Systems Specialist.

Peers commend CSM Brock for his integrity, leadership skills and vast accomplishments within the U.S. Army. In his strong recommendation of CSM Brock, Col. Pharissee Berry explains it best: “A Soldier who reaches the highest enlisted rank the United States Army has to bestow upon an individual, Command Sergeant Major, has proven his worth as a competent leader of men and women, and has earned the respect of those he has led and of the General Officers he has advised over the years.” A leader is measured by the accomplishments of the people he cared about and mentored, and CSM Brock led hundreds of soldiers on the path of success in the military, instilling in them the importance of character growth and community involvement.

While in the military, CSM Brock represented the best of St. Louis and the Ritenour School District in 20 countries. He culminated 30 years of military service with 12 assignments ranging from Europe, Korea, Southwest Asia and the United States. During the course of his career, he was awarded three Bronze Stars for his meritorious service in addition to the 25 other awards and decorations he received.  He demonstrated a continuing commitment to professional growth by completing two master’s degrees after earning a bachelor’s degree along with six military courses during his career.

Above all else, CSM Brock is a caring father and husband. In spite of his great personal success, CSM Brock remains humble, never failing to dedicate his time and resources to friends, family and community. He sets the bar high for future generations of Ritenour graduates. 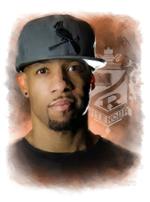 Brian Haley is a three-time GRAMMY Award-winning musician in Christian artist TobyMac’s band, DiverseCity. He is also a motivational speaker, addressing large crowds before performances and spreading his message of love and unity to various groups ranging from students to NBA and NFL teams.

Haley graduated from Ritenour High School in 1991, where he lettered in football, basketball and track. During his senior year, the Huskies took first place in the Suburban North Conference for basketball with a 19-4 record. Haley used his gift for leading and encouraging others throughout his high school sports career, often leading his team in prayer before games.

Haley began his musical journey at a young age when he started playing drums for his church. He continued playing in the church band through high school. After graduation, Haley played basketball for a year at St. Louis Community College at Florissant Valley before going back to his musical roots and moving to Nashville, Tenn. to pursue music full time. There he played for many artists such as CeCe Winans, Dr. Bobby Jones, The Clark Sisters, Ben Tankard, TLC, SWV, Donnie McClurkin, and many more before joining TobyMac’s  DiverseCity band.

Haley now doubles as a drummer and professional motivational speaker, engaging sold-out stadiums across the world. His desire to unify a broken world led him to initiate the “We Are 1 Movement,” a movement with the goal of bringing unity to the world and promoting the message, “We are better, stronger, and faster together.” All profits from Haley’s “We Are 1” clothing line go directly toward helping people in need.

It should come as no surprise that Haley’s closest friends and colleagues agree that his hard work and dedication have earned him his place in the Ritenour Hall of Fame. His humility, talent, drive and ability to relate to others makes Haley a role model for current Ritenour students. His advice to high school students is to be different and stand out. “Everyone wants to fit in,” says Haley, “but the stand-outs are the ones who are not afraid to be who they are. That’s how you truly make a difference.” 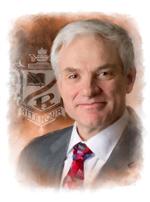 Dr. Steven Herrmann is a world-class cardiologist in Bradford, Pa. Aside from countless awards, grants and peer-reviewed publications, what makes Dr. Herrmann truly stand out in the eyes of his colleagues is his unique ability and willingness to teach his skills to others as a mentor and teacher to colleagues and medical students alike.

Dr. Hermann is listed in “Who’s Who” in Academic Medicine, and is a member of the International Society of Cardiology’s Top Cardiologists in the World since 2009. He has also been on the Consumer Research Council’s Best Cardiologists in USA list from 2009 to 2015 and has been on numerous other Top Doctor lists throughout his career.  He has published 19 abstracts, 13 peer-reviewed articles and many text book chapters.

Colleagues praise Dr. Herrmann for his professionalism and compassion. His success is marked not only by his personal achievements, but also the accomplishments of students and peers he has mentored along the way, and the patients who owe their lives to his dedication to medicine. 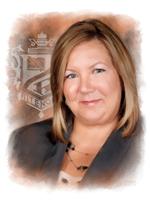 Karin Marie Jacoby is senior counsel at the law firm of Husch Blackwell. She is a registered professional engineer and licensed attorney, practicing in the area of water management, including levee safety and flood protection. She is highly regarded in her field and has been appointed to national committees to make recommendations to Congress and the Federal Emergency Management Association (FEMA).

Jacoby’s current position at Husch Blackwell combines her engineering experience and legal education.  In her career, Jacoby has directed a $600 million waterways development and flood damage-reduction program, prepared a levee-system improvement plan for a district along the Missouri River, managed a number of large-scale multi-purpose projects and has done engineering for public and private site developments. She has co-authored three publications on levees and civil engineering.

Jacoby has dedicated thousands of volunteer hours. For the past 15 years she’s served  as the executive director of the Missouri and Associated Rivers Coalition (MOARC) , a long-standing regional organization with the mission of promoting conservation and beneficial use of water-land resources, and is serving a third term on the Board of the National Waterways Conference. She helped to establish the American Public Works Association Water Resources Management Committee and also Kansas City River Trails, a local nonprofit guiding development and implementation of the bi-state Riverfront Heritage Trail and its Public Art Master Plan.  Jacoby also directs the law firm’s pro bono Neighborhood Partner Program focused on helping the Historic Manheim Park Association with its community revitalization.

Jacoby was honored by the Engineer’s Club of St. Louis as Young Engineer of the Year in 1993.  In Kansas City, she was a Women Firsts Honoree in 1999, recognized for being the first female Section Manager in the City Engineer’s office, and in 2005 named as one of five “People to Watch” by the Kansas City Star. Following Hurricane Katrina, she was appointed by the Assistant Secretary of the Army to serve on the congressionally established National Committee on Levee Safety for which she received the Commander’s Award for Public Service from the U.S. Army Corps of Engineers in 2009. She was inducted in to the Missouri University of Science and Technology Academy of Civil Engineers in 2015, and from the Kansas City Industrial Council she received their Progress Award for Improving Waterways.

Jacoby loves the outdoors, fishing, traveling and spending time with family and friends.  She is known for her adventurous spirit and commitment to encouraging others to fulfill their potential. Friends commend Jacoby for her ambition, passionate concerns for the environment and loyalty to friends and family. She is a role model who knows how to balance her professional and personal lives while making a difference in her community. 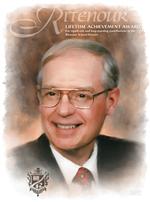 Ken Crowder dedicated nearly 40 years to the Ritenour School District, where he taught eighth grade American History and Civics to more than 4,500 students at Ritenour Middle School.  After retiring in 2010, he has remained an active member of the Overland community through his volunteer work.

Crowder graduated from Mercy High School in University City, Mo. in 1967. He is a lifelong resident of Overland and still lives in the house where he grew up. Crowder began his Ritenour journey at Ritenour Middle School in 1972. Former students remember him for his patriotism and his passion for sharing his love of country with his students. It became a tradition for him to play, “Proud to Be an American” for each class on the last day of school and shake every student’s hand. His students still talk about the swell of pride they felt as they reflected on what that song and that moment meant to them.

Crowder made an effort to build a relationship with all of his students. He had a knack for getting even the most challenging students to open up and reach their potential in his class. Beyond the curriculum, he instilled self confidence in his students and taught them the importance of hard work and building relationships. Crowder demonstrated his own hard work and dedication by missing only one day of school in his entire career.

Each year, Crowder’s students completed hands-on learning projects for their American History class to bring history to life. From building Native American teepees to creating wagon wheel replicas, students worked together to create new masterpieces every year that would occasionally be put on display in the community. Crowder’s homeroom students looked forward to the yearly tradition of being delivered hamburgers from Chuck-A-Burger by a fleet of classic cars to celebrate the end of the school year.

Always finding new ways to serve his students and community, Crowder founded the district’s annual food drive. He is Chairman of the Overland Neighborhood Preservation Commission, and he is on the Overland Police Pension Board and the Overland Business Association Board. He was also appointed to the Overland Planning and Zoning Commission.

Crowder’s influence has reached every corner of the Overland community, and his commitment to his teaching profession is unsurpassed by any Ritenour teacher. He has spent a lifetime making the Ritenour community a better place, making him highly deserving of the district’s Lifetime Achievement Award.