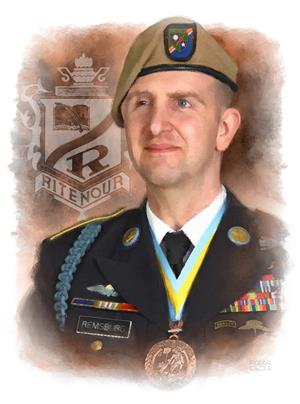 Sgt. 1st Class (SFC) Cory Remsburg, a former Army Ranger, is known nationwide as one of the many faces of United States wounded warriors. After sustaining a traumatic brain injury while serving in Afghanistan in October 2009, SFC Remsburg has made a remarkable recovery through hard work, perseverance and the loving support of his family. He was a guest of former President Barack Obama at the annual State of the Union Address in 2014, where he received the longest standing ovation of the evening.  His amazing story has been featured in the media hundreds of times in the past four years.

SFC Remsburg was born in Phoenix, Ariz., but spent his elementary and high school years in Overland, Mo.  He graduated from Ritenour High School in 2001, where he was a self-proclaimed band geek.  He participated in the school’s marching band, orchestra and jazz band, and also belonged to the German Club and played on the varsity volleyball team. SFC Remsburg was active in the U.S. Air Force Auxiliary Civil Air Patrol program in high school, as well. He has fond memories of his “shenanigans” in band and orchestra class and of his favorite teacher, Hadley Haux.

After graduation, SFC Remsburg enlisted in the U.S. Army and became an Army Ranger. He was stationed in Savannah, Ga., where he served with the 1st Ranger battalion for more than seven years. Maj. Gen. Richard D. Clark describes him as an “exceptional soldier and a model citizen,” as well as “one of the most intelligent, fun-loving and gregarious soldiers in the entire organization.” He deployed 10 times during the Global War on Terrorism and was critically injured in October 2009. Some of the many awards SFC Remsburg has earned include the Bronze Star, the Purple Heart, the Meritorious Service Medal and the Joint Service Commendation Medal.

Throughout his long journey to recovery, SFC Remsburg has been a symbol of hope and courage for other injured veterans and everyone he meets. He actively participates in local, state, national and international events, inspiring others to “keep pushing on” when challenged by personal events. SFC Remsburg has shown his heroism time and again – whether through his selfless service in Iraq and Afghanistan, or through the incredible effort he continues to pour into his rehabilitation. Now, he is a hero to people around the world as he uses his experiences to lift others up and show them that anything is possible. SFC Remsburg displays grace, humility and a sense of humor in everything he does, and we are proud to welcome him to the Ritenour Hall of Fame.