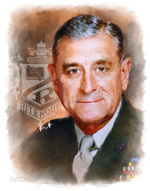 Major General James Lewis Day, Class of 1948, left Ritenour in 1943 to join the Marines. On May 14, 1945, during ferocious fighting on Okinawa, he volunteered to lead a ten-man squad up Sugar Loaf Hill to evacuate wounded Americans. By the end of the day, all but Day and comrade Dale Bertoli were dead, and Bertoli had lost the use of his hands. For three days Day waged a solitary battle from a shell crater, repeatedly fending off attacks from 1,200 Japanese soldiers. His defense of the position allowed his battalion to advance and proved to be the key to crushing the enemy’s line across Okinawa.

After the war, Day returned to Overland and earned a GED from Ritenour before re-enlisting in the Marines for a distinguished career. But his nomination for the Medal of Honor was lost in the turmoil of World War II and did not resurface until 1996, ten years after his retirement. Finally, on January 20, 1998, more than half a century after the 19-year-old Marine corporal played a pivotal role in the United States’ victory in the Pacific, Jim Day went to the White House to receive his country’s highest honor from President Bill Clinton. The Marine Corp Recruit Depot in San Diego has since named its Command Museum after Major General Day.

Day died of a heart attack in October 1998. He is survived by his wife, Sally, of Cathedral City, California, four children and eight grandchildren. A son and a grandson followed in Day’s footsteps and also became United States Marines. 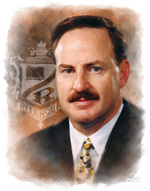 David Fuchs, Class of 1979, enlisted in the Navy after graduation and was a member of the All-Navy Basketball Team. He has been named a Distinguished Alumni of Sigma Tau Gamma at University of Missouri-St. Louis and a Fellow in the fraternity’s Wilson C. Morris Foundation.

In 1989 Fuchs founded Tri-Tek Information Systems, Inc., of which he is president and CEO. The company now employs more than 300 people, conducts business in 49 states and had revenues of more than $35 million in 1998. It is the fastest-growing company in St. Louis in 1999 and one of the 500 fastest growing in the country. Earlier this year, Fuchs was recognized by the St. Louis Business Journal as one of 40 outstanding St. Louisans under age 40.

He is a member of the board of directors and a key financial supporter of the West County YMCA, the founder of the St. Louis Youth Camp Foundation and an active supporter of cancer research through the Jimmy V. Foundation. He also volunteers hundreds of hours and dollars to Ritenour basketball teams.

Fuchs lives in West St. Louis County with his wife, Liz, and their children: Christopher, 10; Danielle, 8; and Tyler, 6. He is the son of Shirley Fuchs of St. John and the late Russell Fuchs. His sister, Deanna Cruse, lives in Maryland Heights. 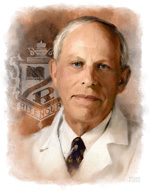 Dr. Albert Oberman, Class of 1951, is recognized nationally and internationally for his involvement in landmark health studies. They include the prevention and treatment of hypertension, the management of coronary heart disease, the role of exercise in cardiac rehabilitation and the health of women and minorities. Oberman earned undergraduate and medical degrees from Washington University. His residency and internship was at Jewish Hospital/ Barnes Group. He has also completed a graduate degree in public health and a fellowship in cardiovascular epidemiology at the University of Michigan, as well as spending three years in the U.S. Public Health Service as an investigator for a major research project at the U.S. Naval Aerospace Medical Institute in Pensacola, Florida. Since 1967, he has been at the University of Alabama at Birmingham, serving as a professor in the School of Medicine and as director of the Division of Preventive Medicine, which he created in 1976. This division has developed into one of the largest academic research programs in the country. He has published more than 200 scientific articles, authored medical texts and served on many national committees.

Oberman and his wife, Marian, live in Mountain Brook, Alabama. They have three grown children, Steven, David and Karen and five grandchildren. Oberman is the son of the late Max and Helen Oberman, who for many years owned Lackland Dry Goods in Overland. His sisters, Leatrice Shank and Estelle Bitman, live in Overland and Boston, Massachusetts respectively. 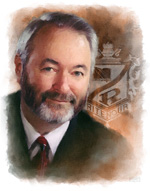 In 1983, Payton felt called to move in a completely different direction. The young man, whose only previous association with theater was working in the box office for his senior play, formed Celebrity Attractions in Tulsa. For the past 16 years, he and his wife, Kay, have kept the lights of Broadway burning bright in mid-America by presenting major theatrical and musical performances. Currently, Payton is a producer of the national tours of “Peter Pan” and “Cirque Ingenieux” and is involved with the Broadway productions of “Footloose” and “You’re a Good Man, Charlie Brown.” He is a trustee of Oklahoma Baptist University and was Tulsa’s Small Business person of the Year in 1997.

The Payton family includes Drew, a freshman at Oklahoma Baptist University, and Laura, a high school freshman. Payton is the son of Dorothy and the late Earl Payton. His brother, Ed, a 1968 Ritenour graduate, has worked with him at Celebrity Attractions since 1997. 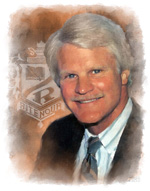 Jerry Reuss, Class of 1967, was signed by the St. Louis Baseball Cardinals the month he graduated from Ritenour and went on to fulfill his dream of pitching in the majors during a 22-year career with the Cardinals, Astros, Pirates, Dodgers, Reds, Angels, White Sox and Brewers.

He was named to the National League All-Star Team in 1975 and again in 1980, when he led the National League with six shutouts, pitched a no-hitter against the Giants and was named National League Comeback Player of the Year by The Sporting News. As a member of the Dodgers, he won the fifth game of the 1981 World Series against the Yankees. In a final tour with the Pirates in 1990, Ruess became just the 22nd player and the eighth pitcher in baseball history whose career spanned four decades.

Since his retirement as a professional baseball player, he has worked as a baseball analyst and play-by-play announcer for ESPN, The Baseball Network, Prime Sports and for the American League’s Anaheim Angels on Channel 9 in Los Angeles. He has compiled a volume, Joel Whitburn’s Top Pop Guide Singles CD Guide 1955-1979, and is an accomplished sports photographer whose work has appeared in magazines and on Upper Deck baseball cards.

Ruess lives in Las Vegas with his wife, Chantal. He is the son of Viola Reuss of Overland and the late Melvin Reuss. His brothers, Jim and John, live in Houston, Texas, and O’Fallon, Missouri, respectively. 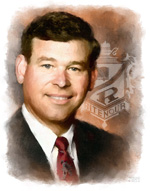 Robert Todd, Class of 1966, has been head baseball coach at the Ohio State University since 1988. The 1999 season was full of milestones. On May 1, he earned his 600th career victory as a college coach, and four days later, with his 479th OSU win, the became the winningest coach in the university’s 119-year history. The Buckeyes climbed into the country’s top ten with a 21-game winning streak and earned their sixth Big Ten title in 11 years – keeping alive another impressive tradition – every player Todd has recruited for Ohio State has left with a Big Ten Championship ring.

Todd was an assistant coach at Ritenour and the University of Missouri for ten years after college graduation before becoming head coach at Kent State University in Ohio in 1984. Through the years, 62 of his players have signed professional contracts. He has been Big Ten Coach of the Year three times and National Coach of the Year in 1994, the same year he was named an assistant coach for USA Baseball at the World Games.

Todd and his wife, Glenda, who taught at Hoech Junior High in the early 1970s, have four children: Scott; Jeff; Brad and Stacey. Todd is the son of Martha Todd, a former secretary at Midland School and the late Virgil Todd, a long-time COE teacher at Ritenour. His brother, Dan, and sister, Kris Leach, live in Lena, Illinois, and Carrollton, Texas, respectively.