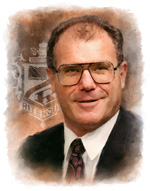 When the Russians launched Sputnik I in October 1957, they launched Terry Straeter’s career, as well. Ritenour High School recognized the need to intensify math and science instruction and formed an advanced class for the very brightese students. Straeter was at the top of the class.

He worked at NASA’s Langley Research Center in Hampton, Virginia. At a time of major technological breakthroughs in aviation and avionics, Straeter proved he was destined to be a pioneer in those fields. In 1979, Straeter joined General Dynamics as corporate director of technical software. He was eventually named corporate vice president and general manager of the electronics division (GDE) in 1991. GDE became Marconi Integrated Systems, Inc., and Straeter retired in 1999 as president and CEO of that company. He has served as a member of the Senate Select Committee on Intelligence, on the board of directors of the Aerostructures Corporation and United States Marine Repair, Inc., on the board of governors of the Electronic Industries Alliance and as chairman of the board of directors of the Government Electronics & Information Technology Association.

Straeter is a strong supporter of numerous charities including the United Way, the USO World organization, the Juvenile Diabetes Foundation and St. Vincent de Paul Village. Retirement will find him devoted to his stable of racehorses.

He and his wife, Jinny, live in Poway, California. They are the parents of Kelly Straeter-Garrett and Kristen and Ingrid Straeter. He is the son of Jane Straeter of St. Louis and the late Edwin Straeter. 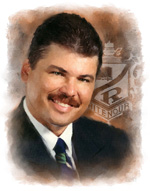 Those who remember Tom McIntyre as a young man recall especially his accomplishments on the football field – captain of both his high school and college teams, a three-year letterman in high school and a unanimous All-Conference selection for two years at Southwest Missouri State University.

After completing a degree in education in 1974, he was signed by the Houston Oilers, but left training camp for the Peace Corps where he spent two years teaching on the island of Saipan in Micronesia. In 1978 he received a master’s degree in teaching from Southeast Missouri State and joined the faculty of Melbourne (Florida) High School as a math and physical education teacher and assistant football coach. He later became head football coach, producing district and regional championship teams in 1985 and 1986, and was named Central Florida Coach of the Year in 1985.

In 1986, McIntyre served as an assistant secondary school principal. He became principal of Rockledge (Florida) High School in 1991, a position he held until this year, when he completed a doctorate in education administration at the University of Central Florida and returned to Melbourne High as principal.

For six years, McIntyre was a member of the board of directors of the Greater West Melbourne Athletic Association, and is now a leader in the Florida High School Activities Association. In 1995, his school was recognized by Redbook magazine as one of the top 100 innovative schools in the country. He was named Senior High Principal of the Year in 1997 by the School District of Brevard County, the 47th largest in the U.S., he received the Kiwanis Man of the Year Award in 1998 and the Rockledge City Council’s Key to the City Award in 1999.

McIntyre passed away on Aug. 13, 2008. He is survived by family including his wife, Mary, and children Sean, Patrick, and Eric. McIntyre is the son of Ann and Ray McIntyre of Overland. 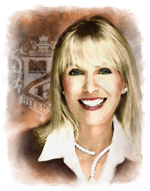 After graduation, Karen Carroll attended the University of Missouri-Columbia before joining TWA as one of its first three female “ground hostesses.” She began her career in St. Louis radio in the 1970s, and by 1983, was vice president/general manager of KSLQ. In 1992 Carroll guided the acquisition of five local stations, forming American Radio Systems, St. Louis’ largest radio group. It was later acquired by CBS, and three years later, CBS named Carroll vice president/general manager of KMOX, “The Voice of St. Louis.”

Carroll has always found time to devote to the community. She is the founder and CEO of Outreach-St. Louis, a foundation that serves more than 80 local charities by conducting on-air programs to create awareness of needs and raise money. Carroll is past president of AMC Cancer Research and created the St. Louis AMC Breast Cancer Awareness Walks for Women. She serves on the boards of the Missouri Broadcasting Association, the Urban League, the St. Louis Regional Commerce and Growth Association, the Regional Business Council, Outreach-St. Louis, the Greater St. Louis Area Boy Scouts Council, SSM Healthcare, the University of Missouri-St. Louis Chancellor’s Council and Junior Achievement and is on the executive committee of the St. Louis Art Fair.

The Press Club of Metropolitan St. Louis recognized Carroll as its 2000 Media Person of the Year. She has also received the St. Louis Business Journal 25 Most Influential Business Women Award, the YWCA Women in Leadership Award for Communications, the Radio Advertising Bureau’s Woman of the Year-Radio Wayne Award and the AMC Cancer Research Center Illuminator Award.

Carroll, who lives in Clayton, is the mother of two grown children, Shawn Carroll and Margo Kopman, and the daughter of Berniece Arbuthnot of Ballwin and the late Paul Bowman, creator of Christian Family Services. 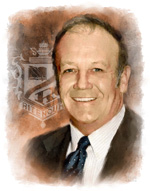 When George Chapman began first grade at Marvin School in 1931, his teacher could scarcely have imagined the influence her pupil was to have on the future of the Ritenour District. He graduated in the midst of World War II, enlisted in the Marines and served with distinction for three and a half years as an Air Corps gunner in the Philippines and China.

He came home to marry Doris Zdvorak, his high school sweetheart, and to earn a degree in business administration from Culver Stockton College. In 1950, he joined Ferguson High School, teaching math, serving as vocational coordinator and coaching football and wrestling. After earning a master’s degree from the University of Missouri-Columbia, he became an assistant principal there, and in 1958 he returned to Ritenour as assistant principal under the legendary O. W. Costilow. When Costilow retired in 1960, Chapman replaced him. At the time Ritenour was the largest three-year high school in the state. In 1967, he joined the district administrative team as assistant superintendent for secondary education, a position he held for 15 years. During his tenure, he had a hand in every major innovation in the district.

Shortly after his retirement in 1982, Chapman joined St. Johns Bank as vice president for business development. He gained the bank’s backing for the annual RHS Student Leadership Retreat, which has benefited more than 700 Ritenour students to date, and assisted in securing guaranteed loans per year for Ritenour graduates.

Chapman is a life-long member of Marvin Park United Methodist Church, and a past officer of the Ritenour Optimist Club. He has served on the boards of several organizations and as an adjunct professor for three universities. But he is proudest that, as the only Ritenour graduate to return as high school principal and assistant superintendent, he will always be known to many as “Mr. Ritenour.” He and Doris live in Creve Coeur. They are the parents of three children, Chris and Keith Chapman and Kay Ingram, all Ritenour graduates. The Chapmans have eight grandchildren. 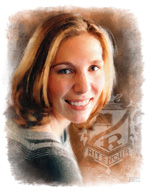 There probably aren’t many little girls who say they’re going to be archaeologists when they grow up and actually follow through, but that’s exactly what Michelle Loyet did. At Washington University she was named an All-American Scholar and graduated cum laude with a B.A. in anthropology in 1994. During her undergraduate years, she served as a research and laboratory assistant in the paleoethnobotany and zooarchaeology labs. With the help of her advisors, she obtained a collection of bones from Syria and as a result, she was invited to spend five seasons with the team excavating that site, Tell Tuneinir. Her honors thesis focused on those Bronze Age faunal materials.

That work was also the topic of her master’s thesis at the University of Missouri-Columbia, papers she presented at meetings of the Society for American Archaeology and the American Schools of Oriental Research and an article published in the Journal of Near Eastern Studies.

Since finishing her master’s in anthropology in 1998, Loyet has worked at the Islamic Period site of Al Basra in Morocco, with the Oriental Institute; with the University of Chicago, at their Chalcolithic site of Tell Kurdu in southern Turkey; and with Yale University at the site of Tell Leilan in northern Syria. She has completed a pre-doctoral fellowship at the Smithsonian Institution in Washington, DC, and is currently a doctoral candidate in anthropology at the University of Illinois at Urbana-Champaign.

Loyet is the author of numerous academic publications, is a frequent presenter at archaeological conferences and has served as a guest lecturer for adult and children’s groups. She is the submissions editor for the Journal of the Steward Anthropological Society at the University of Illinois. She is currently a teaching assistant in the University of Illinois anthropology department.

Loyet was raised by her grandparents, Ann and Ray Burnett of Breckenridge Hills. She lives in Champaign, Illinois.