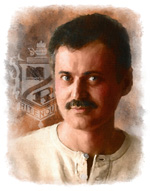 Nicholson has been given six fellowships and has served on numerous committees and organizations in the United States and United Kingdom. Nicholson is an alumnus and former member of the board of directors of New Dramatists, a member of PEN and the Dramatist’s Guild, and a veteran of official Artistic Exchanges to both Ireland’s and the People’s Republic of China. He has received a Federation of the Dramatists Guild/CBS Award and multiple fellowships for the National Endowment for the Arts. Nicholson has been a Playwright in Residence at the Repertory Theatre of Saint Louis and an Artist in Residence at Shakespeare’s Globe.

As an educator, he spent six years as the Playwriting Component of the professional Writing Program at Washington University in St. Louis. He also developed a creative writing curriculum for students ranging from second grade to high school. Many of his produced plays – “Miss Julie Bodiford,” “Beyond Here Are Monsters,” “And Howl at the Moon” and “Blue Moon Rising” – have enjoyed very enthusiastic receptions in a number of different venues.

Nicholson currently resides in Charlack. He is the son of the late Charles and Mary Nicholson. Mary was also a Ritenour graduate, Class of 1930. 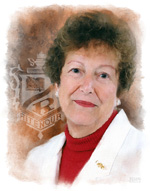 June Wuest Becht began her prestigious career in athletics as a triple-letter sports star – in basketball, field hockey and volleyball – at Ritenour High School. She returned to RHS to become a teacher, coach and Girl’s Athletic Director in 1951. She served as president of the St. Louis County Women’s Physical Education Club in 1959. Becht became an instructor at Washington University in 1971 and published the 1904 Olympic Pictures Study through the university in 1980. She has also served as a lecturer in the Sociology and History of Sports and Physical Education at the University of Missouri-St. Louis.

Becht’s talent and love of sports led her to specialize in the Olympics, specifically female athletes involved in the Olympics, where she has become an accomplished presenter, writer and historian. She has attended nine of 12 Olympic Academies and was selected as the official United States delegate to attend the International Olympic Academy in Greece, where she was chosen as a presenter. She was also chosen to present a slide show and lecture for the Olympic Gala in Atlanta in 1996.

Becht has written over 190 articles – published both locally, nationally and internationally – on the Olympics and female athletes. She has been referred to as “one of the world’s outstanding women sportswriters and sports historians” and has received numerous awards and recognition for her writing and athletic accomplishments. Becht recently revisited RHS as an alumni panelist at the Ritenour Student Leadership Conference in 2000.

She and her husband, Harvey, have been married for 48 years and live in St. Louis. They have two daughters and two granddaughters. 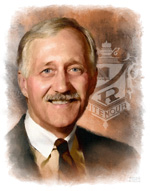 Dr. Leslie W. Miller is not only the Director of the Cardiovascular Division at the University of Minnesota, he is an accomplished clinician, mentor and teacher known throughout the world. For his teaching, he has received numerous awards including “Teacher of the Year,” “Senior Student Golden Apple,” and “Residents Outstanding Teacher” from St. Louis University Medical Center where he practiced before moving to Minnesota. He has also been recognized in The Best Doctors in America in 1994, 1996 and 1997.

While at St. Louis University, he played a critical role in establishing the importance of cardiology in the field of transplantation and rose to both national and international recognition in the field of cardiac transplantation. One of his colleagues remarked that Dr. Miller ” has maintained a standard of excellence that challenges those around him to emulate his goals in patient care and extend the boundaries of cardiovascular research.” 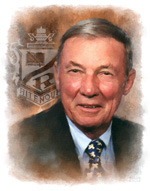 Lyle Fisher returned to his alma mater, Ritenour High School, in 1949 to teach mathematics and social studies, and to serve as counselor and athletics coach. During his nine years at RHS, he organized and sponsored the first Student Council, assisted in the organization of the counseling department and coached the first Ritenour team to become the Missouri State Baseball Champions in 1957. While he was at Ritenour, his coaching abilities helped develop three students who went on to become major league baseball players. Fisher was also an outstanding leader and innovator in the mathematics teaching profession. After his tenure at RHS, Fisher moved to California where he initiated and developed numerous other educational programs and organizations, including the Redwood Mathematics Club at Redwood High School. The club has had more than 48,000 participants in its programs and achieved national recognition.

Fisher served as president of the State of California Mathematics Council, co-authored and published a number of math books, and received many awards and recognition. One of his books, “Problem of the Week,” made over $40,000 in royalties which Fisher donated to the California Mathematics Council Student Activities Trust. He received the Presidential Award for Excellence in Science and Mathematics Teaching, which was presented to him by then United States President Ronald Reagan. He also received the Volunteer of the Year award from Washington Elementary in Pt. Richmond, California, and the Distinguished Service Award for community participation in the City of Richmond.

Fisher retired from the University of California-Berkeley in 1996, ending 48 years of active involvement in education. He is spending his retirement in Pt. Richmond, California, with his wife, Connee, who is also a Ritenour graduate.