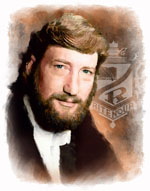 Rich O’Donnell was already a talented musician when he graduated from Ritenour High School in 1955. He took piano lessons as a child because he believed a good percussionist needs to know how to read music and understand its theory. He played the drums each morning for the Pledge of Allegiance during his grade school days and his high school band, The Swing Kings, played at countless assemblies and school functions

As a virtuoso percussionist, numerous composers have written compositions especially for O’Donnell. He has invented a revolutionary playing technique with new type sticks and new pedals. He presented the world premiere of Seesaw Drumming – a technique that allows him to play twice as fast as normal – at the St. Louis City Museum in 2000. O’Donnell has also filed patent applications for four percussion instruments – the sphrahng, aqua-lips, koto-veen and tubalum – he invented and has received grants from the National Endowment for the Arts (NEA) and the Mid-America Arts Alliance. As an instrument builder and artisan he has developed refinements in traditional percussion instruments including timpani, talking drums, bell tress and triangle beaters. He has taught and mentored many successful musicians and composers. 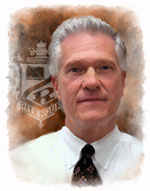 Stephen W. Miller recalls his days at Ritenour High School fondly; especially his friends, athletics and, believe it or not, the course work. After graduating in 1963, Miller attended the University of Missouri – St. Louis where he received a B.S. in accounting and economics. His quality education has served as a strong foundation for his extraordinary management and leadership of multi-million dollar corporations.

He began his climb up the corporate ladder in 1968 as the controller at Banquet Foods, rapidly advancing to increasingly higher level positions at Banquet, the Sara Lee Corporation and Head Sports. Miller moved to Arizona with his family in 1994 to head up AXXESS Technologies, Inc., a fledgling manufacturing company that revolutionized key duplication in retail outlets nationwide. AXXESS was merged with The Hillman Group in 2000 and now generates over $270,000,000 in annual revenues and is the market leader in four major product categories that are distributed to big box retailers such as Wal-Mart, Lowes, Home Depot, PetSmart and PetCo. Miller now serves as the vice chairman of the Hillman Group, providing the vision for the company’s future as well as the disciplines and procedures necessary to safeguard company assets and leverage operating results. Miller has received many honors during his career and has also served as a member of the board of directors of several outside companies. He believes every employee’s contribution is valuable to the overall success of any company and his people skills and remarkable leadership add to his success as an effective executive.

Miller is known for combining the best aspects of a business and community leader. He is very active with his church, having served on the Church Council for over seven years and as moderator for three of those years. Miller is the proud father of five children: Mike; Brianna; Alex; Matthew; Ryan, and grandfather to Julia. He currently resides in Paradise Valley, Arizona, with his wife Deborah and their four youngest children. 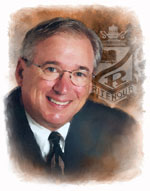 Dr. Michael D. Loberg graduated from Ritenour in 1965. He spent the next 35 years becoming a dedicated scientist and savvy businessman researching and marketing several new medicines. Loberg has distinguished himself both as a scientist and a business executive. After attending Trinity College and receiving his Ph.D. in chemistry from Washington University, Loberg served as an assistant and later an associate professor of medicine and medicinal chemistry in the Schools of Medicine and Pharmacy of the University of Maryland. He has published over 60 scholarly articles and has obtained extensive funding in support of research and graduate education programs. One of the products Loberg researched became a diagnostic drug distributed worldwide by many companies including Bristol-Myers Squibb. Later he left the University of Maryland to manage a significant portion of Bristol-Myers Squibb’s R&D, and for the last 15 years there, he lead all of their U.S. and European pharmaceutical businesses, including their oncology and HIV businesses. He is currently serving as Chief Executive Officer of NitroMed, a biotech company in Boston, where he is researching new medicines to extend the lives of African-Americans with heart failure.

Loberg is also an active member of the community, serving as chair of the Annual United Way campaign for central New Jersey and the annual American Cancer Society campaign for the New Jersey counties of Mercer, Middlesex and New Brunswick. He has co-organized and participated in numerous fundraising efforts for oncology patient support groups and remains involved in groups assisting cancer patients at Martha’s Vineyard, Massachusetts. Loberg currently lives in Boston, Massachusetts, with his wife, Melinda. They have a son, Brad and daughter, Andrea. 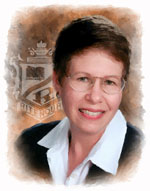 From the time she was a little girl, Dr. Susan Wuest Devaney knew she wanted to work in the field of human services when she grew up. She soon decided to focus on nursing and has been working hard in that area ever since.

After graduating from Ritenour High School in 1968, she attended the University of Missouri – Columbia. She soon had physical proof that her high school education was a quality one – two of her college textbooks were identical to the ones she had used at Ritenour High School. She graduated in 1972 with a BS in Nursing. Devaney immediately began working as a public health nurse. In 1975, she co-founded and co-chaired the Friends of the MU School of Nursing, the group that is largely responsible for the construction of the School of Nursing building on the Mizzou campus which is still in use today.

Dr. Devaney just completed her second term as President of the Missouri League for Nursing (MLN). Previously she made outstanding contributions while serving as chair of the MLN Program Committee. Her expertise in education assisted in the expansion of the MLN continuing education offerings and the organization’s growing leadership among continuing health education providers in Missouri. In 1979, Devaney began teaching at Central Methodist College in Fayette, Missouri. During the next 22 years, she learned to become both a proficient teacher and an active member of the community.

Devaney currently resides in Hallsville, Missouri, with her husband Michael. They have lived on their farm in northern Boone County for the past 29 years. They have three sons, James, Patrick and Timothy. 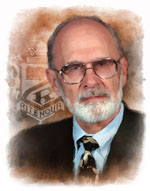 When Dr. Dwight C. Look graduated from Ritenour High School in 1956, he was already known as a class leader, a hard-working student and a good friend who was quick to volunteer. Since his youth he has kept up with that excellent reputation, dedicating 33 years of service to the field of education and is now a Professor Emeritus of Mechanical & Aerospace Engineering.

After leaving Ritenour he received a B.S. from Central College, an M.S. from the University of Nebraska and a Ph.D. from the University of Oklahoma. Look joined the staff at the University of Nebraska as a teaching assistant in the Physics Department in 1960. He went on to teach at Texas Christian University, the University of Oklahoma and eventually came to the University of Missouri – Rolla (UMR) in 1969 where he stayed for the duration of his career. His research focused on the area of heat transfer and, more specifically, thermal radiation. Look helped create the Thermal Radiation Laboratory at the university to further study the scattering of polarized radiation. Look is actively involved in a number of professional organizations including the American Institute of Aeronautics and Astronautics (AIAA), the American Society of Mechanical Engineers (ASME), the International Society for Optical Engineering (SPIE) and the American Society for Engineering Education (ASEE). He has co-authored two textbooks on thermodynamics and more than 100 technical journal publications. He has received many honors and awards including Who’s Who in Science and Engineering (2nd-5th Editions); Who’s Who in American Education (5th Edition); Who’s Who in the World (12th Edition); American Men and Women of Science (1992, 1994 and 1997); Men of Achievement (17th Edition); and the Eminent Scholar, Tau Beta Pi award. Look is also an athletics booster who takes time to coach baseball and basketball teams and help out with the local Cub & Boy Scouts. Further, he has coached football for UMR, has practiced Tae Kwon Do for 15 years and is a registered skeet shooter.

Look and his wife, Patricia, currently reside in Rolla, Missouri. They enjoy spending time with their two children and five grandchildren. Their older son Dwight, a physician at the University of Iowa, has a daughter and a son. Their younger son, Douglas, a vice president of a bank in Columbia, Missouri, has triplets – two girls and a boy. 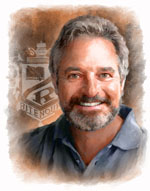 Since 1975, Mike Keefe (Ritenour class of ’64) has been the editorial cartoonist for The Denver Post. He’s been a weekly contributor to USA Today and a regular on America Online. Nationally syndicated, his cartoons have appeared in Time, Newsweek, US News and World Report, The New York Times, The Washington Post and in over 200 newspapers across the country. Keefe has won the top journalism awards from The Society of Professional Journalists, The National Headliners Club, The Fischetti Competition and The Best of West Contest. He was a John S. Knight Fellow at Stanford University and is past President of the Association of American Editorial Cartoonists. He was twice a juror for the Pulitzer Prizes in Journalism.

Keefe co-created two syndicated comic strips in the 1980′s (Cooper and Iota.) He is the author of several books including Running Awry (McGraw-Hill) and The Ten-Speed Commandments (Doubleday.) His animation credits include “The Life and Times of Ralph and Louie”, “Talking Heads”, “AM” and commercial work that earned a PROMAX Gold Medallion.

Keefe is a former U.S. Marine, college math teacher, president of the Rocky Mountain Chapter of the Leukemia/Lymphoma Society and for a short time (before Frank Shorter’s heat) the state masters record holder in the indoor mile. He plays guitar in an oldies Rock band in Evergreen, Colorado, to the utter embarrassment of his son and daughter. His wife, Anita, is a software developer and the technical wizard behind Keefe’s animations. 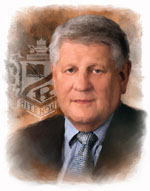 It was a good sign that Earl Thompson was destined for great things when he graduated from Ritenour High School in 1949 as the record holder for varsity letters with a total of 12.

Thompson went on to receive a B.S. in Electrical Engineering from Washington University in St. Louis. He later attended the Massachusetts Institute of Technology’s School for Corporate Professionals in a leadership advancement program. Thompson served 49 years in manned spaceflight, aerospace and information technology. He served as technical advisor to the original seven astronauts and to Gemini, Apollo, Skylab and the early space shuttle astronauts. Thompson was a flight controller for 38 missions in the NASA control center (including John Glenn’s historic Mercury flight, Neil Armstrong’s landing on the moon and Jim Lovell’s calamitous Apollo 13 flight) and nine USAF missions. He served for three years as a consultant to the U.S. Air Force Space Division in Los Angeles, California, and eventually became the Director of Manned Space Missions. Thompson has received much recognition during his industry career from McDonnell Douglas, Martin Marietta, Veridian Engineering and five NASA centers.

After 29 years working for major aerospace companies, Thompson co-founded a small business in Houston, Texas, that marketed manned spaceflight consulting services. Through this company, he spent seven years in Germany as the only American advisor to their growing manned space activities. Thompson was awarded a gold medal from the German Minister of Science and Technology and three Significant Meritorious Service medals from the European Space Agency.

Thompson passed away Feb. 25, 2010, and is survived by his wife, Vycki Haught, and son, Christopher Haught-Thompson.