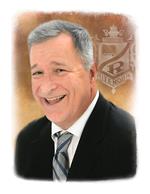 Daniel Fortune is a renowned track athlete and coach, educator and advocate for students with disabilities. Fortune’s impressive athletic accomplishments in high school and college propelled him into a successful coaching career. In his current role as a Community Based Vocational Instruction Instructor in the Special School District, he continues to improve the lives of all he encounters, including children and adults with disabilities, through their access to sports and enriching activities.

During his time at Ritenour High School, Fortune was one of the most successful track athletes in the State of Missouri. As a senior at the 1977 Missouri State Track & Field Championship, Fortune won the “triple crown” of sprinting - the 110-, 220- and 440-yard dashes. That year, he was named the St. Louis Post-Dispatch Track and Field Athlete of the Year.

Fortune was well-known not only for his talent, but also for his friendly and welcoming demeanor, and for being a team leader who always represented the best of Ritenour.

Fortune went on to have a successful college track career at the University of Missouri, where he still maintains the 5th all-time fastest record for the 200-meter dash.  As a track coach for various St. Louis area high schools, he has coached 36 All-State athletes, and his teams have won two district titles.

After receiving his Bachelor of Science from University of Missouri - Columbia in 1982, Fortune later went on to earn his Master of Business Administration from Southern Illinois University - Edwardsville in 1995 and his Master of Arts in Education from Lindenwood University in 2010.

From 1986 to 2003, Fortune worked for the St. Louis Society for Children and Adults with Physical Disabilities. He shared his passion for activities and athletics through the creation of scuba and ski programs for disabled youth. He helped start and was actively involved in afterschool programs in the Special School District and in Saint Louis Public Schools and also organized the Variety Club Sports Camp and a yearly tennis tournament for Paralympic athletes.   He worked hard to ensure that children and adults of all ability levels had the opportunity to participate in community activities and sports.

Today, Fortune recruits local high school students with disabilities, where he works to expand their vocational training and opportunities.

A genuine humanitarian, Fortune has dedicated his career to providing enriching opportunities that highlight the special abilities of children, youths and adults, and to opening new doors for their future. He currently resides in Glendale, Mo. with his wife Colleen and two sons, Ryan and Patrick. 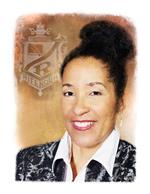 Cynthia (Willis) Simmons is a senior executive in the federal government and serves as Chief of the Instrument Systems and Technology Division at the NASA Goddard Space Flight Center (GSFC) in Greenbelt, Md., where she leads more than 220 engineers and technicians. Simmons has earned numerous awards and accolades throughout her illustrious career and continues to push the boundaries of technology in space exploration.

Simmons was fascinated with space from a young age and enjoyed delving into science fiction movies and TV shows like Star Trek as a child. She says she was enthralled by the thought of space travel after watching the first landing on the moon and the astronauts returning to Earth.

After graduating from Ritenour High School in 1978 with a 3.98 GPA, Simmons was the first African-American woman in Missouri to be accepted into the U.S. Air Force Academy, where she studied biology and aerospace engineering. She was featured in local and national publications for her accomplishment of being one of the first African-American females expected to graduate from the Academy. She graduated with honors in 1982 with a Bachelor of Science in Biology/Engineering, and then earned a Master of Engineering in Aerospace Engineering from the University of Maryland in 2005.

Simmons has played a crucial role in launching many successful satellites throughout her career in the Air Force, commercial space industry, and at NASA, first as a contractor, and then as a civil servant in her dream job. She has created numerous designs for spacecraft and spaceflight instruments, such as the Sample Analysis at Mars (SAM) instrument suite on the Mars Curiosity Rover. Simmons was honored to have the name of her mother, Eva G. Willis, engraved on a plaque affixed to the Mars Curiosity Rover, in memory of the woman who pushed her to follow her dreams.

Colleagues recognize Simmons for her integrity, ambition, strong leadership skills and for her exceptional mind. She is a role model for women in her field and is considered a “change maker” within NASA. Her contributions have been recognized through many awards, a few of which include the NASA Exceptional Achievement Medal (2012), the Robert H. Goddard Leadership Honor Award in both 2015 and 2017, nominee for the Samuel J. Heyman Service to America Medal (2016) and recipient of the NASA/GSFC Special Act Award (2015). She was selected as a Women @ NASA honoree in 2014, and was appointed Senior Fellow by the Goddard Space Flight Center Director to advise him on the Center’s goals and strategies. Time and again she has demonstrated her effective leadership skills in her roles as Instrument Manager, Instrument Project Manager, Associate Division Chief and Division Chief at NASA.

No matter where her career takes her, Simmons makes time to pursue hobbies and give back to the community. She is a black belt in Tai Chi and travels often to China for competition. She also takes every opportunity to share her NASA experiences with girls and boys of all ages and backgrounds, “exposing them to what’s possible and encouraging them to reach higher.”

Don H. Maxey had a positive influence on the lives of countless students during his 35-year teaching and coaching career (1954-1989). He was a member of the Ritenour High School faculty for 29 years, where he developed the Huskies highly recognized basketball program. Maxey is the winningest coach in school history with a record of 286-67.

His teams dominated the state with their accomplishments throughout his tenure. Ritenour’s basketball games created a sense of pride and excitement for students and the community. Fans packed Costilow Field House year after year.

Maxey’s teams were also trendsetters. They were the first high school team to wear blazers for travel on game days, presenting a team image that reflected their positive character and sportsmanship. He approached teaching and coaching with enthusiasm, innovation and dedication. Maxey believed that the strength of a team was created in the depth of character, enthusiasm and coachability of the players. Numerous players were named All-Conference, All-District, All-State, and All-Americans. Many players received college athletic scholarships and were successful at the collegiate level too.

In 1988, Maxey was awarded the Scholastic Coach - National High School Basketball Coaching Award for his years of excellence as a high school basketball coach.  He continued his passion for the game of basketball as a Missouri Valley Conference collegiate official and MSHSAA high school basketball official for a number of years. Don was also an avid outdoorsman and served as a Hunter Safety Instructor for the Missouri Department of Conservation.

Although Maxey is remembered for his success on the court, he served in various other capacities at Ritenour High School.  He was the head golf coach and assistant track coach, two sports he also personally had excelled in as an athlete. He also taught social studies, health, and physical education.  Additionally, he served as a supervisor for the Cooperative Occupational Education program (COE), director of Ritenour’s Summer School Program, and supervised the Adult Continuing Education Program.

A successful athlete himself, Maxey lettered in baseball, football, track and basketball in high school. He continued his athletic career at Kirksville State Teachers’ College (now Truman State University), where he excelled in basketball and track while earning his undergraduate and graduate degrees. He also earned a Master’s Degree and completed advanced post-graduate studies.

During his senior year in college, Maxey enlisted in the United States Marine Corps and upon graduation entered officers’ training school in Quantico, Virginia. He was commissioned a second lieutenant, serving during the Korean War.  He embraced and lived by the Marine Corps motto: Semper Fi, “Always Faithful.”

Maxey passed away in 2001 and is buried at Jefferson Barracks National Cemetery. A devoted husband and father, Maxey and his wife, Bonnie, proudly raised four children who graduated from Ritenour High School: Julie (1976), Cathy (1978), and twins Mark and Sherri (1979). 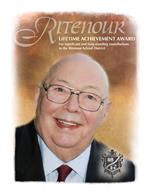 Howard Williamson is a retired award-winning school counselor.  His passion for student achievement and success led him to pioneer new ideas and innovations in guidance and counseling.

His goal was to ensure that all students were prepared for a successful future after leaving high school.This belief was evident throughout his 33 years in the district by the increased emphasis he put on career education and by the help and encouragement he gave adults who had dropped out of high school to achieve their educational goals.

Williamson joined Ritenour High School as a counselor in 1964. A year later, he was selected to lead the guidance department. Recognizing that not all students were headed directly to college, he created new career opportunities for students prior to graduation. During Williamson’s tenure, RHS was the largest three-year high school for grades 10-12 in Missouri.

As part of a state/national educational committee, Williamson also helped pioneer a program aimed at preventing students in junior high from dropping out before they reached high school.  The committee garnered state approval for what became Armbruster Vo-Prep, the first school in the nation to offer pre-vocational education to younger students who were at risk of dropping out of school. The program began in 1971, and Williamson served as assistant principal and counselor at the school from 1985 to 1987.

From 1987 until his retirement in 1997, Williamson worked with all phases of the Ritenour Adult Education and Community Education programs, including the GED program that leads to a high school equivalency certificate.

His greatest satisfaction is running into former students who say, “If it hadn’t been for your encouragement, I’d never have finished high school,” or “My family couldn’t pay for college.  The scholarship you helped me get changed my life.”

Williamson and his wife, Patty, now split their time between Overland and their eight-months-a-year home in Door County, Wisconsin, where he works as a substitute teacher in the local school district with 600 students in grades K-12.  Patty was Ritenour’s first full-time public relations professional, serving the district from 1966 - 1978. They have three children (one deceased), nine grandchildren and 18 great-grandchildren.