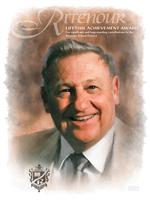 Lee Engert touched the lives of thousands of Ritenour students over the course of his 35-year career as a teacher, mentor and coach at Ritenour High School from 1953 to 1988.

Best known throughout the Ritenour community as a baseball coach at the high school, Engert finished his 17-year tenure as the head baseball coach in 1975 with two state championships and 14 Suburban North titles under his belt.  He had a career record of 329 wins and 102 losses, and coached two future major league baseball players, Jerry Reuss and Ron Hunt.

Although Engert is often remembered for his success in coaching baseball, he also coached football and basketball.  In the classroom, he taught biology, driver’s education, health and physical education.  He sponsored Ritenour’s student council and was also assistant principal for two years under Dr. George Chapman.  Former students and players agree that he didn’t just teach them the basics of biology or the fundamentals of the game; he taught them life lessons in responsibility, self respect and sportsmanship.  Engert had a lasting impression on his students because he cared about them and wanted to help shape them into men and women of honor and integrity.

Prior to his time at Ritenour High School, Engert served in the U.S. Marine Corp after graduating from Roosevelt High School in St. Louis in 1947.   He continued to coach baseball at the junior college level after leaving Ritenour and finished his coaching career after 40 years of baseball leadership.

Engert is no stranger to Hall of Fame ceremonies, as he is a member of the Valparaiso (Indiana) University Athletic Hall of Fame, the Amateur Baseball Hall of Fame and the Missouri High School Coaches Hall of Fame.  In 1973, he was named the NCAA High School National Baseball Coach of the Year.  He has also enjoyed success in his personal life.  He has been happily married to his wife, Joy, for more than 50 years.  They have three daughters – Renee, Colette and Suzette.

At the start of the new millennium, Ritenour High School celebrated Engert’s outstanding career by naming the baseball field in his honor.  At alumni events, his name often comes up in conversation as former students discuss the positive impact he had on their lives.  A number of Ritenour Hall of Fame inductees have even asked Engert to present them at the annual ceremony.  It is only fitting that Lee Engert take his place in Ritenour history as this year’s Lifetime Achievement Award recipient. 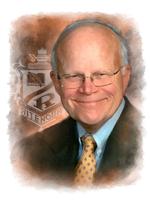 William “Bill” Sullins has led a successful banking career in St. Louis, helping many local businesses flourish along the way through his wise advice and guidance.  Friends know him as a loving family man who is devoted to his faith, serving his community, and enjoying golf and travelling.

After graduating from Ritenour High School in 1956, Sullins went on to receive his Bachelor of Arts and Science degrees from Washington University in 1960.  He began his illustrious banking career at Boatman’s National Bank in St. Louis, and while there also earned a graduate degree from the Rutgers University Graduate School of Banking in 1970.  After 15 years at Boatman’s, he joined Commerce Bank in 1975, where he remained until retiring in 2003.

Early in his career with Commerce, Sullins became CEO of numerous acquired banks in St. Louis.  As Vice Chairman of Commerce Bancshares, he was responsible for lending in the St. Louis region, and had administrative and lending responsibilities for outstate regions in Illinois, Missouri and Kansas.   The Human Resources function for the holding company reported directly to Sullins, and he was responsible for 1,600 employees.  During Sullins term as Vice Chairman, Commerce Bank became the largest hometown bank in St. Louis, and Commerce Bancshares grew to over $5 billion in assets.

Friends of Sullins say he always has a smile on his face, and he lives to serve others.  Through the years, he has been actively involved on civic boards and task forces including the United Way, BJC Health Systems, Christian Hospital, the Saint Louis Art Museum and Junior Achievement as well as a number of other charities and organizations.  He inspired young people through the Junior Achievement program in St. Louis by introducing them to the fundamentals of business and economics.  Sullins also served as senior warden of The Church of St. Michael and St. George.

Sullins was a founding member of the Ritenour Pride and Promise Foundation, contributing his time, wisdom and resources to building it from the ground up.  When he’s not dedicating time to his community, he satisfies his wanderlust by travelling the world with his wife, Ann.  Sullins’ strong leadership skills, philanthropic nature and gentle, steadfast personality have led to his successful balance of career, community and family life.  He is the ideal role model for future generations of Ritenour students. 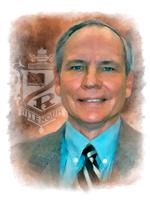 Stephen Trauth is an accomplished West Point graduate, retired Lieutenant Colonel in the U.S. Army and is currently a senior systems engineer at Assurance Technology Corp.  Trauth credits his success to God’s blessings, the love and support of his family and the contributions of many selfless people to his personal and professional life.

In his Ritenour days, he was a three-time State Wrestling Champion and the first Missouri wrestler to become a Scholastic Wrestling News All-American.  After graduating from Ritenour in 1970, he continued wrestling at West Point, lettered in wrestling and soccer and graduated in the top 10 percent of his class in 1974. In 2013, Trauth was inducted into the National Wrestling Hall of Fame.

Trauth served 20 years as an Army officer, retiring in 1994.  While in the Army, Trauth demonstrated that he was a man of many talents and passions.  He was an Airborne Ranger, West Point Physical Education instructor, assistant coach for Army varsity wrestling and tennis teams, physical trainer for the USA Special Olympics team, and an Armored Cavalry and Intelligence officer at assignments around the world. Among his military awards, he received the Legion of Merit.

Since retiring, Trauth has been a military consultant and systems engineer.  He has authored professional articles in military and technical publications. Trauth specialized in the design of advanced military command, control, communications, computers and intelligence systems for Army, Navy, Air Force, Marines, Coast Guard and national agencies. He has received several awards from military commanders and the Department of Defense for his contribution to our military warfighting capabilities.

Trauth has been blessed with a wonderful wife, two sons and a daughter. His greatest joys have come as a husband and father. He and his wife, Heidi, were active members of Twin Oaks Presbyterian Church for 18 years.  Trauth has always been guided by his faith, as evidenced through the numerous Christian leadership roles he has taken on since high school.  He led Bible studies at West Point, and continued to lead military Bible studies worldwide.  He was a local and regional leader for Officers’ Christian Fellowship.  Today, he and his wife are known for their efforts to serve their church community.

Trauth’s genuine demeanor and loyalty have earned him lifelong friendships and respect in his community.  Friends talk about his character, his strong sense of morals, his intelligence and his faith in God.  He is always looking for ways to nurture friendships and give back to his community.  In retrospect, God destined and equipped Trauth to serve. His leadership and service to our country have earned him a place in the Ritenour Hall of Fame. 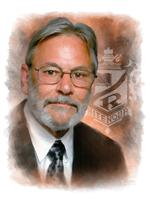 Glenn "Chuck" Westover has led a life of public service, highlighted by his illustrious teaching career. He is praised for his ability to instill a love of science in his students and for his passion and boundless energy. Westover has promoted science education locally, regionally and nationally, establishing a reputation as an outstanding science teacher among his peers and students.

Westover graduated from Ritenour High School in 1964. He completed his Bachelor of Science degree in 1968 at Southeast Missouri State University, followed by his Master of Education in 1975 at University of Missouri-St. Louis. He began teaching science in 1968 and retired in 2003.

Through the years, Westover received many awards and accolades recognizing his excellence in teaching. He always strived to improve the learning and teaching of science, and he was ranked in the top1 percent of teachers in the nation. Among his many personal and professional awards, Westover received the National Presidential Award for Excellence in Science Teaching from the President of the United States, the National Science Foundation and The National Association of Science Teachers, the Outstanding Biology Teacher Award for Missouri from the National Association of Biology Teachers, the Radio Shack National Teacher Award, and the Outstanding Science Teacher Award from the Academy of Science of St. Louis. He was a four-time recipient of the Outstanding Achievement Award in the Ferguson-Florissant School District, where he was also a Teacher of the Year finalist. Aside from teaching, he also received the United States Army Commendation Medal for "Exceptional Meritorious Service" in 1972.

Outside of the classroom, Westover kept busy with a number of professional development activities. He participated in various science teaching outreach programs with Monsanto, Washington University, University of Missouri St. Louis, and others. He also presented and participated in many local and national conventions during his career.

Westover has been married to his wife Barbara for 37 years, and they have three children - Leah, Linda and Zach. His family took part in the Youth for Understanding exchange program, hosting a total of 12 exchange students from all over the world. He was also a Boy Scout Troop leader, and volunteered hundreds of hours accompanying students on outdoor adventures ranging from camping and canoeing to spelunking and rock climbing. He also served as the faculty sponsor/coach for the McCluer North High School "Odyssey of the Mind" team which competed nationally in competitions in creative problem solving.

In retirement, Westover continues to give back to the community and do what he does best: educate children. He has been an Oasis tutoring volunteer in the Ferguson-Florissant School District and is a volunteer in the St. Louis Zoo Docent program. He has touched the lives of countless students through his passionate teaching style, and Ritenour is proud to bring him home to his alma mater to recognize his accomplishments.